Skip to content
Previous Next
After four years held as a sex slave in Sharjah, Jennifer flys home to Nigeria

After four years held as a sex slave in Sharjah, Jennifer flys home to Nigeria

Finally, we managed to repatriate Jennifer from the United Arab Emirates (UAE) to Nigeria after a four-year ordeal. She travelled to the UAE to work as a chef but was incarcerated and forced to work as a prostitute in Sharjah for 4 years. Having had her passport removed and sold and with the effects of COVID, it took us 3 months to repatriate her. Another Nigerian victim of Human Trafficking to the UAE returned.

Jennifer’s ordeal started after a store owner close to her mother’s shop in Lagos asked if she would be interested to work abroad as a chef. Coming from an impoverished family in Lagos she was immediately attracted by the proposed salary. Her family agreed to pay a large sum of money for the introduction, travel and visa fees. This was to be offset against her wages of $60 per day.

Upon arrival in the UAE her passport and phone were taken away by her agent. The passport was never returned and it was later discovered to have been sold to a Nigerian who subsequently travelled to the USA. She was taken to a Nigerian-owned illegal drinking and dining club based in an apartment in Sharjah. At first, she was happy to be cooking but after a week she was told she would be having sex with the clients.

With no way to contact her elderly parents back home and a prisoner in the apartment, she had no choice but to comply. So began her four-year ordeal of sex abuse, rape, verbal abuse and beatings. As is commonplace, if a client reported that she refused to have sex without a condom, she had chilli paste smeared in her vagina. In one incident she was beaten with the blunt edge of a carving knife and endured regular beatings with a belt and bouts of being denied food.

Jennifer was forced to sleep with patrons of the club, sometimes multiple men at a time. The club was mainly frequented by Africans to whom paying $60 for sex was a lot of money compared to sex at home, typically costing $2-$10. This meant that clients felt they were owed something and consequently, in Jennifer’s words, “they treated me like an animal”.

Jennifer managed to escape after her trafficker returned to Nigeria to have a baby. The husband remained in UAE to manage the apartment. One day he asked Jennifer to take the rubbish out. She bundled a dress and a phone a sympathetic client had recently bought her into a black bag and once on the street, she fled.

Four years of incarceration had taken its toll on Jennifer both physically and mentally. When she contacted us she was living on the street and enduring near-constant menstrual bleeding. She was disorientated and beside herself with fear, shame and anger. How could she have been forced to have sex with that many men for that long and now be left penniless and unable to get home?

Our incredible Nigerian partner in Dubai, Jacob, took Jennifer in and after two months of navigating the court system, we managed to secure an Emergency Travel Pass and a seat on an Air Peace evacuation flight. Over this period Jacob would take Jennifer to the park in the evenings to play ball with other Nigerian women working or stranded in Dubai. She started to decompress mentally, feed adequately and in time her bleeding resolved. 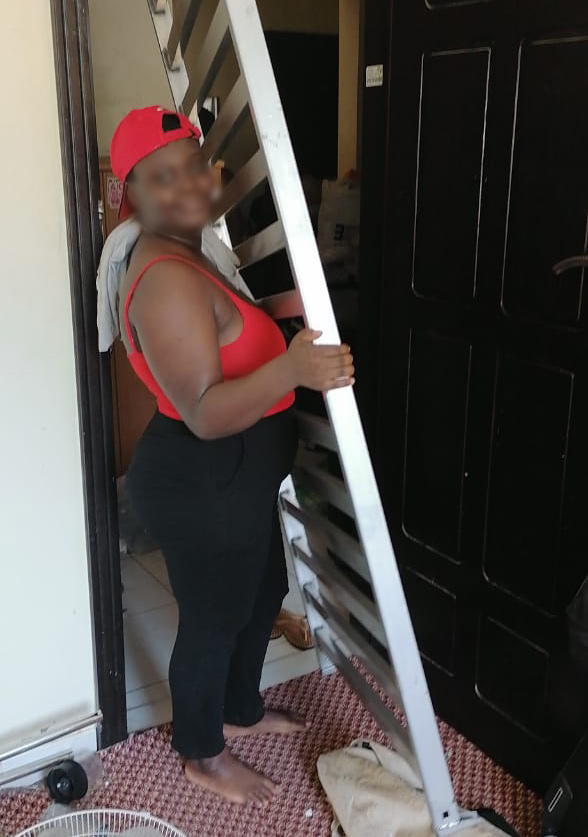 Jennifer helping at the safe house in Dubai

The day of her departure for Lagos was emotional. Owing to COVID many Nigerians were stuck in Dubai, many unpaid for months. Large crowds had started to gather outside the Nigerian Consulate and the staff were ordered to work from home. We felt relieved to have secured a place on the twice-monthly evacuation flight, all be it at double the commercial rate. It was with glee that we learned she was seated in Premium economy, fitting for a woman who had suffered so much.

Jennifer was met by the UK funded Joint Border Task Force in Lagos and after being de-briefed to gather evidence, she was taken to the NAPTIP shelter for medical screening and counselling. When she called us at the end of this three week stay in isolation, she was ecstatically happy and supremely grateful. She was discharged to her parents in Lagos and is now awaiting enrollment into the IOM enrichment program.

Thanks to the incredible support of our donors we were able to raise the $2,000 required to return Jennifer to Nigeria. We have committed to sending her a small weekly stipend for three months until she enters the IOM program for training and mentoring. We are so grateful to our wonderful supporters who dug deep so quickly when asked for help. Thank you, your kindness has changed, if not saved, Jennifer’s life. She is truly grateful.