This is the remarkable story of a young Kenyan woman who was trafficked to the UAE for sexual exploitation. She escaped and a chance search on Instagram by her sister back in Nairobi led to her rescue and repatriation by Send Them Home.

Sarah, 22 is one of five sisters and was raised by the eldest Wilma, now 32. Their parents were alcoholics and when she was just 22, Wilma took her four sisters away and has been raising and providing for them ever since. They now all live together in Kitengela, south of Nairobi surviving off the small income Wilma makes selling jewellery and trinkets on Instagram.

Sarah was introduced to a woman locally who said she was looking for waitresses to go and work in the UAE. Given the lack of employment opportunities, she jumped at the chance. This is her story in her own words of how the dream job quickly unravelled into a nightmare.

“Dressing up and saying goodbye to my sisters was very exciting. I had never been out of Kitengela before so the flight was very exciting. When I arrived in Abu Dhabi the woman who met me took everything, my bag, my phone and passport and we took a taxi to Al Ain, about 175km west of Abu Dhabi.    We arrived at the house it was a club and the men were saying “this one is very beautiful”. I was shocked. The place was run by a Ugandan lady and her husband.”

“I was very shocked, I’ve never done something like that. I used to cry in the toilet. They locked me downstairs for three months, I used to cry, cry every time I went to my bed, I wanted to go home. They would bring men down and at first I was earning lots of Dirham but at the end of the first week, they took all the money away. They would beat me if you didn’t do sex, a bad lady from Uganda, very bad lady.”

“It was very scary and the men treated me very bad, like an animal because they know they paid for it. And you cant tell the lady “this one did this to me”, they beat me up. And the man used to come and take me upstairs to the club and push you in front of everybody. And there’s nothing you can do – you don’t have no brother there, no mother to look after you. Some days they didnt give me food. They were very bad.” 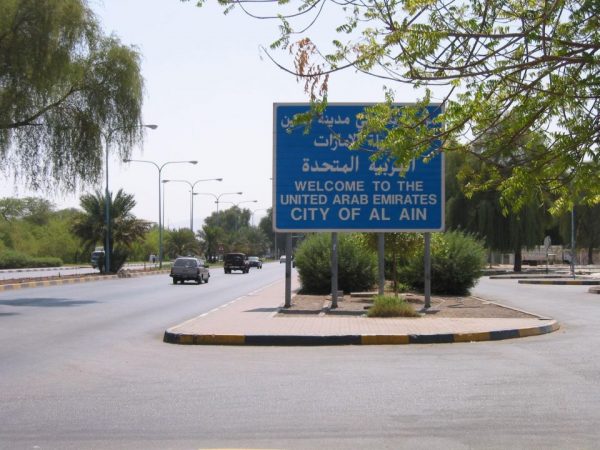 Sarah was trafficked to the desert town of Al Ain, United Arab Emirates

“There was one other girl working there, a Ugandan, and she told me whatever they ask just do it because if you don’t she will beat you down. She showed me what to do. Whatever the men want to do I used to do as I don’t want a fight and I don’t know anyone in that Dubai. I’ve never been there, nobody has been there from our home.”

“Two Kenyan boys would come and see me and just give me money, not to have sex. They also bought me a phone and gave me the name of a Zimbabwean woman in Dubai. One day I was told to throw garbage out after three months. It was the first time I was outside all this time. So when I went, I put my clothes, the money & phone from the Kenyan boys and a photocopy of my visa inside the garbage bag. When I got outside I ran to the Police but they told me to go home.  I had to sleep on the street. It was raining that night and I was very scared.”

Sarah reunited with two of her sisters in Kenya

“I googled where to go to meet the Zimbabwean lady and took the bus. I never met a nice lady like that. I would sleep whilst she was at work as the bed was very small.. There were three in the room and some nights I would sleep on the roof. Life was very hard in Dubai and there was very little food.”

Sarah went to the police in Dubai and after some time they recovered her passport, arresting the traffickers in the process. Sarah made contact with her sisters in Nairobi but there was nothing the family could do as they barely have enough food to eat, let alone pay their sister’s visa fines and flights.

After three months of hiding in Dubai, Sarah’s youngest sister back on Nairobi was going through the Explorer page of Instagram one evening. By chance, she came across the Send Them Home story appealing for donations. She clicked through to the website and sent us an email explaining her sister’s plight.

We were able to have a video conversation with the sisters to check out the facts of the story and then made contact with Sarah in Dubai. The details of how she got home follow the same pattern of visas and the usual problems of getting anything done in Dubai without one. But three days after this chance encounter through Instagram, Sarah landed at Nairobi airport to be met by her sisters, 6 months after the start of her ordeal.

Sarah’s story highlights just how easy it is to get trafficked when you are poor, vulnerable and ambitious to better your life. Asked what advice Sarah might have from anyone considering a job abroad she told us: “Don't go there, get a job in your country. Don't trust anyone, friends even your uncle. It's fun when you go there - dressing up, landing in Dubai, it's fun. But when you go there it’s very hard.”

An amusing incident occurred shortly after Sarah’s return home. One of her neighbours reported Sarah to the police, worried that she was carrying coronavirus from the UAE. The health police visited the house and to the astonishment of her sisters, she said she had a temperature. She was taken into isolation custody where she was found not to have a temperature. After seven days of being imprisoned once again she was released. When she got home her sisters asked why she had lied about her temperature - Sarah said that she thought she would be famous and make money if she had caught the virus!

As a footnote, it is also worth mentioning the plight of Leonah, the Zimbabwean woman and her husband who gave Sarah food and shelter for three months for no payment. They have been laid off owing to coronavirus and are now wracking up rent arrears and visa fines. Their outlook is not good and they now find themselves in the same situation as Sarah. Their plight makes us feel inadequate and our hearts ache for their suffering.